It was another very nice evening in Portland.  We had a groupon for a highly rated Mexican restaurant called Que Pasa which is just off of Hawthorn street on the SE part of town.  The place was pretty busy and we had to rush to get out of there to see the movie.

﻿﻿﻿ With a beer and a sangria and tip our total cost was 20 bucks for everything and we saved about 15 with the groupon.  I put up a better review on Yelp.

Then we scurried off for a 1 mile walk to the Clinton Theatre to watch a screening of bidder 70.  We once again walked through Ladd's rose garden that I posted about before and this time I took a picture of his plaque which says more about who he was.  If you click on the pic it will blow up and you can read it.

I really love how Portland does things like just ask for help.  People pitch in all the time and help tend public trees and donate to help the trees.  This street was canopied by HUGE elm trees.  In other place these elms have long died from dutch elm disease, but here there are a bunch of them.  People are encouraged to help protect the trees and 120 bucks seems cheap considering the beauty and the shade and all that the tree gives to the neighborhood. 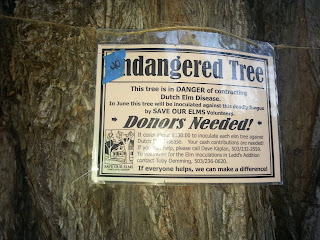 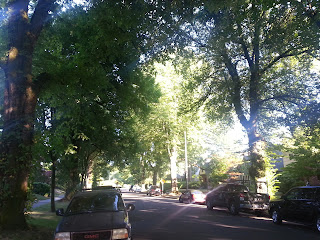 Then we got to Clinton theatre.  It is an old theatre that shows all sorts of different movies, but not the big current blockbusters.   Bidder 70 is about a guy who bid for and won several federal drilling contracts on public land near the arches national monument in Utah.  The movie was not all that enlightening, but it was interesting none the less.

After that we continued walking down Division street and checked out what was going on.  We bookmarked several good restaurants using Yelp.  Then we noticed a large crowd with a sign for live music.  We had stumbled upon The Landmark Saloon on 49th and Division.  There was a really good bluegrass band and they had 24 ounce PBR's for 2 bucks.  Cara got an oatmeal stout for 3 bucks.  It was a divey place with a really nice outdoor patio.  I would recommend this place to anybody.

At about 10 we hopped the bus and headed home.  After 11 or so the bus starts running a lot less frequently and we needed to get up for a big day.
Posted by A Travelers Log at 1:35 PM