We got up at about 10, had breakfast and headed out at about 11:30.  We went walking on Alberta Street and just checked out some things.  The goal of the day was to check out some different areas of town and get a flavor of Portland.  My brother and sister had never been here before.

After a little while we hopped the bus and headed into the International Beer Festival.  We were there long enough for my Bro to use his tickets and then we headed on.  We saw some good bands and had a good time there.

On the way we stopped for a pic in honor of our nephew Jake. 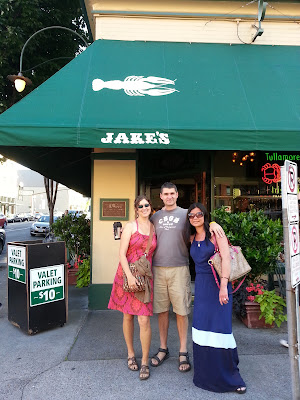 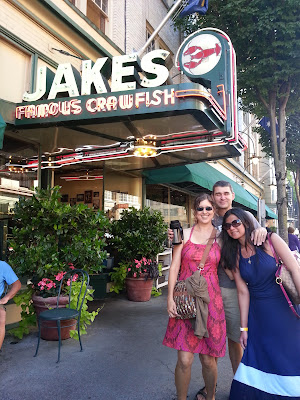 We decided to hop into a place called "the Life of Riley" just because we liked the name.  Usually I am on top of reviews and stake things out, but we were just winging it at this point.  We ordered 3 things and they were all nicely spiced.  They were all on the spicey side, but not too much for our tastes.

Normally we review things online and quiz everybody on the ratings and all of that, but this time we just chilled out and had a good time.  Off the cuff I give them 4 out of 5 stars.

After that we went in and played some pinball at McMinnimans.  It was nice since we had a pinball machine growing up.

After that we hopped the bus and headed off to Hawthorne street and then BAM before you knew it it was 1 in the morning.  My brother saw a cool shirt on the bartender and he literally bought it off of his back.  He has a friend who buy shirts for each other and they just randomly appear in the mail.   I need to get a pic of it.  It really tickled the bartender who was young and saw the humor of it all.  I suggested he send it to his friend unwashed with the story attached.

We headed home because he had to fly out at 6:30 in the morning.  We packed in a full day and a half that was all accomplished with a minimum of planning.