Today was a Wed.  Eric met with Aaron who works at www.nedspace.com and works for NING.  We run a NING network and have tried and failed on some other NING networks.

We went over to the food carts and I had seen on Yelp that one food cart in particular called nongs khao man gai got a lot of raves.  Ironically that very cart was on my bookmarked list on YELP and Aaron decided to go there independantly.  I ordered the main dish they serve, chicken and rice.  When I got it it was all wrapped up in butchers paper.  We walked over to a place to sit down and talk tech.  Aaron does tech support for NING and specializes in helping the new customers do well with their NING networks.  I showed him what we do and he liked it and then we talked about the new 3.0 NING release.

During the day we finalized a handout to explain in one sheet why a restaurant needs to concern itself with Internet marketing and how we can handle it all for them.  I was heading for a meeting and I stopped in for a happy hour burger from mamamiatrattoria.com.  This place always has a crowd and has good yelp ratings.  I noticed a very nicely priced happy hour cheeseburger for 3 bucks.  Right before my meeting was the perfect time.  I ended up sitting at the bar and the owner was sitting next to me.  He was really on the ball and said he had owned restaurants in all the major cities and their family had been in the restaurant business since 1908 and they had never had a failure.  His name was Barry and his son's name is Jerod.  He had retired and his son was running the place.  You could tell that the Barry was like any of the guys on the restaurant turnaround shows but he was quizzing his staff about the wine pours, the seasoning on the calamari, and lots of fine points.  I could see why they do well at restaurants.  I whipped out my brand new sheet and handed it to him and he said  he was on top of it, but is always interested in learning more.  He told me about all they do for marketing and had me sign up for his e-mail program.  I persisted and ended up passing the sheet to a hostess who was supposed to give it to Justin.  My takeaway lesson is that they are on the ball, but a lot of other restaurants need our services because they are not as sophisticated.

That evening I went to a CRM panel discussion.  Storing, manipulating, and using your customer data is very important.  It is not at all easy to do.  It can also be very expensive to do.  There is a whole branch of computing that is devoted to this and it is called CRM.  I am trying to figure out how to start using a CRM system and for this reason I went to a meetup that was a round-table of CRM solutions for non profits.  Many of the CRM systems have moved to a cloud based system that you pay a monthly fee for.  Many of these offer cheaper versions of their products to non profits.

All in all the whole meeting was pretty remedial and I expected it to be a lot more technical and in depth.

After the meeting I went around town and looked for restaurants that were totally dead at 7:00 and went in and introduced myself and gave them our new flyer on Restaurant marketing.  I hit 2 restaurants and one of them was prehispanica restaurant.  This place was totally dead, but had a couple of decent reviews.  The guy I gave the sheet to was going to pass it on. 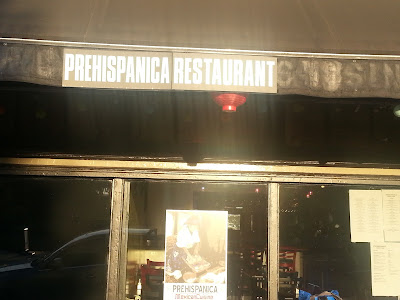 After that it started getting late and I noticed another place on my bookmark list of great cheap Portland restaurants.  It is called Luc Lac.  It is authenticate vietmanese food although I cant vouch for that since I have never been to vietnam.  I did find out that they have a great happy hour deal from 4-6.


It was more than I could eat so I took half of it home and I hopped the bus and called it a night.
Posted by A Travelers Log at 12:08 PM