We left Portland, Oregon in the afternoon and headed east toward Indianapolis, Indiana.  Our first stop was Boise, Idaho, where we stayed the night and were able to briefly meet up with our comedian friend Pat Mac.  We talked a little business, and he gave us some recommendations for our first visit to Yellowstone National Park.  We headed east again and made it to West Yellowstone, Montana, where we planned to camp for the night.  We walked around and checked out the town, which appeared to consist almost entirely of expensive hotels, campgrounds full of huge RVs (with multiple slideouts), gas stations, a few restaurants, and very touristy shops.  Okay, there were also several painted bison:
Okay, there was also a nice looking museum, but we didn't have time to go through it.  Anyway, we browsed for a bit and bought souvenirs at the blowout sale of a store closing for the season, then we inquired about a place to stay for the night.  Even on the discount hotel websites the rooms in West Yellowstone were over $200/night (that's a no go for us), and they wanted over $100/night for a small cabin (also not our speed).  Apparently recent rains had washed out all the tent camping in town, so were were recommended to go to Bakers Hole Campground just north of town.  We got there in the dark to drive around and find the campground full.  We didn't feel like paying a fortune for a few hours of sleep, so we opted to clear a spot to sleep in the car.  It wasn't the best night of sleep either of us got, but the price was right.  So, the next morning we headed into Yellowstone National Park on what turned out to be a gorgeous day.

We went in the west entrance, where the road follows alongside the Madison River.  Then we turned south onto the Grand Loop Road.  Of course, the first place we saw people pulled off and taking photos we had to follow suit.  We were greeted with a beautiful view of a resting buffalo with the steaming Lower Geyser Basin in the distance.
At Lower Geyser Basin it looked we were on another planet.  The immediate area looked dead, populated only by steaming crevices, bubbling mud pots, and a variety of caustic looking pools. 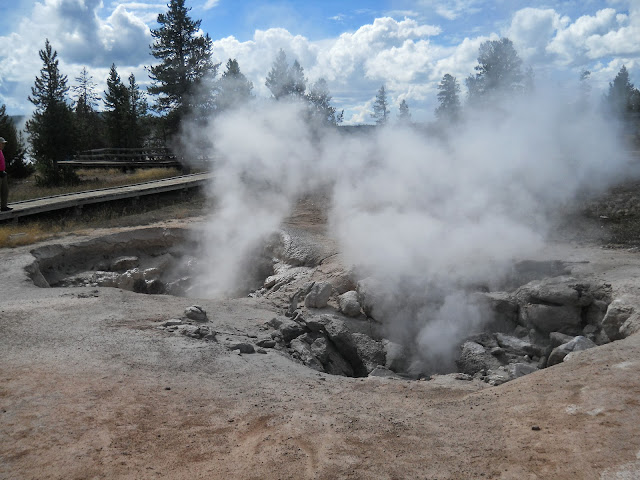 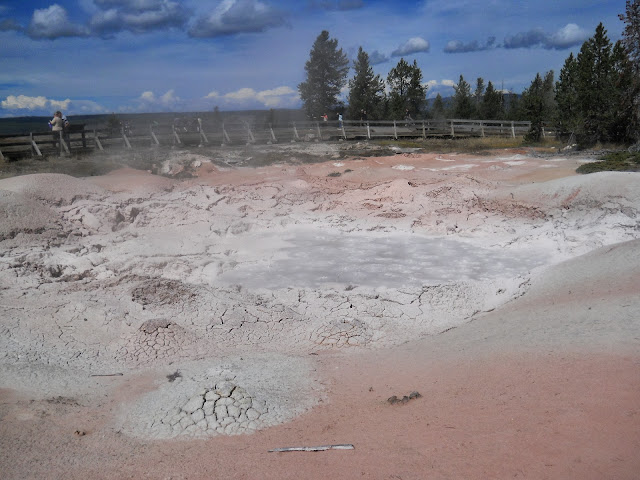 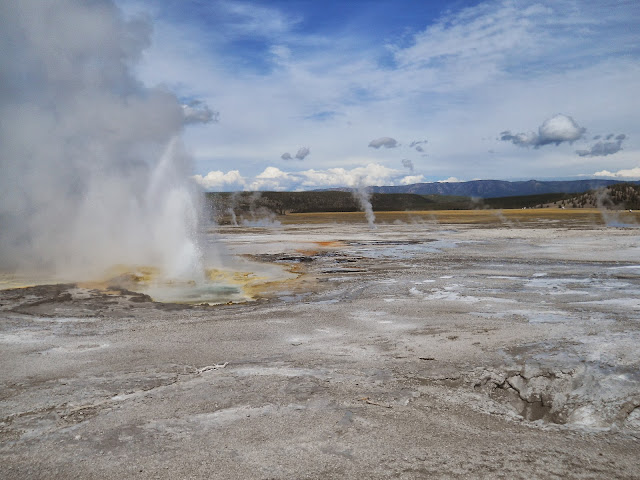 Middle Geyser Basin and, you guessed it, Upper Geyser Basin were next.  We saw hot springs, spouting domes, fuming lakes thick with noxious fog, and steaming streams that emptied into the appropriately named Firehole River (bet it's nice and toasty, but I wouldn't eat the fish).  Cara's favorite feature (though it was much more impressive in person than in photos) was Grand Prismatic Spring.  The bright orange of the surrounding microbial mats blended into deep blue of the hot spring and created an incredible rainbow effect. 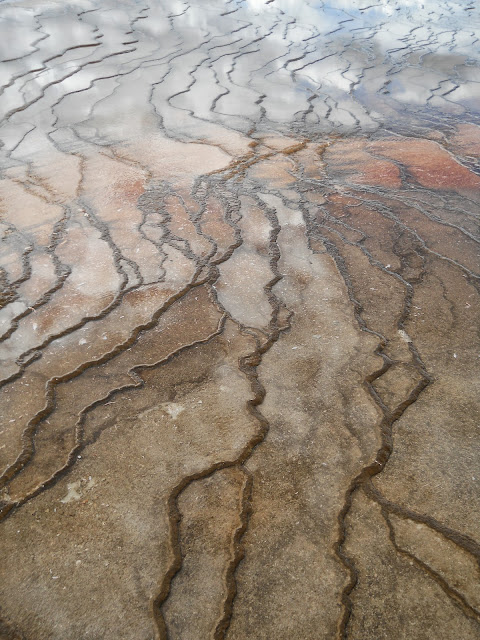 Next stop was Old Faithful.  We hadn't looked up the time it was supposed to erupt, but we couldn't have timed it better.  We had a good amount of time to check out the nice Interpretive Center there before we headed out to watch the famous geyser.  It wasn't long before we were rewarded with our photographic opportunity, although a very short-lived storm cloud did pass over us just as Old Faithful was erupting.
The Old Faithful area offered a plethora of thermal features, each seemingly different.  Here is just a super small sampling of what you see around this area: 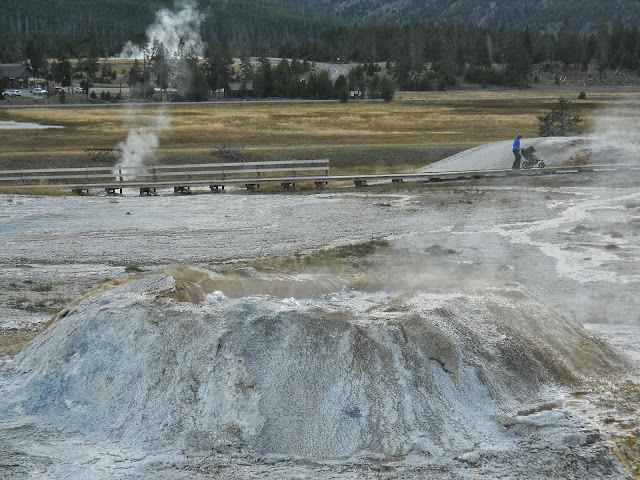 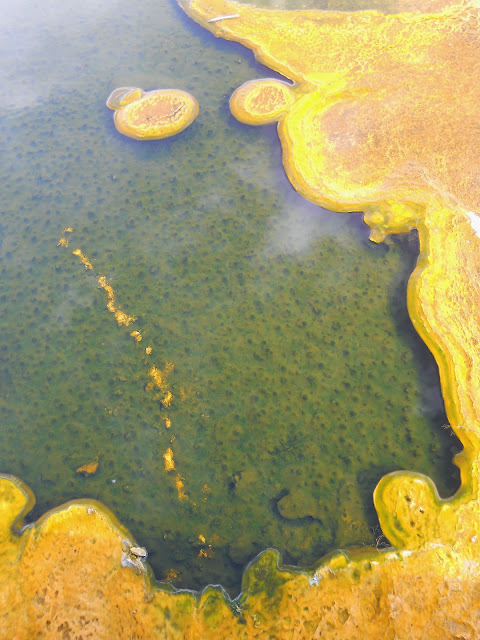 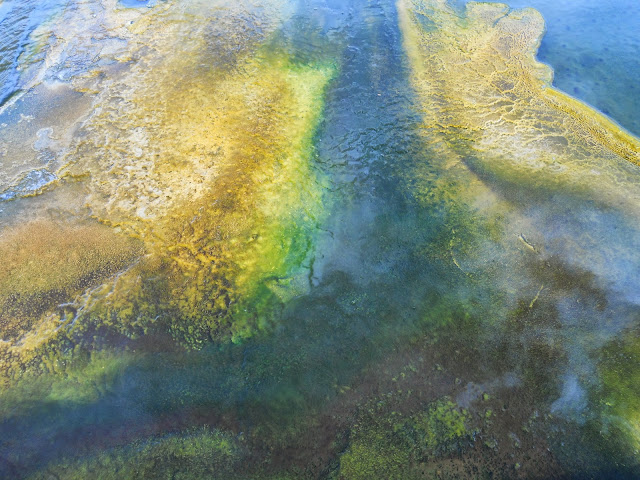 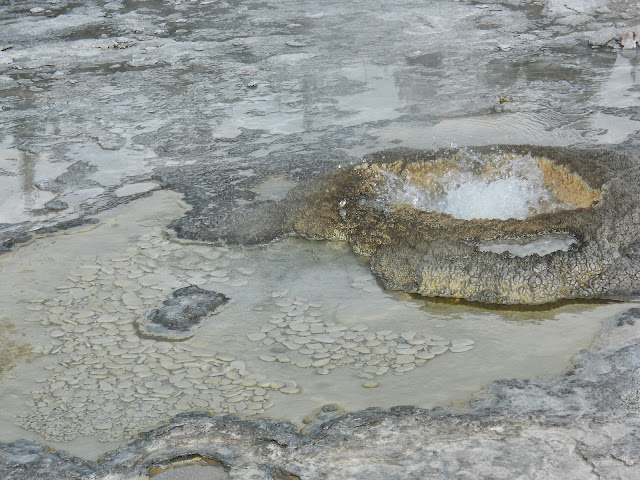 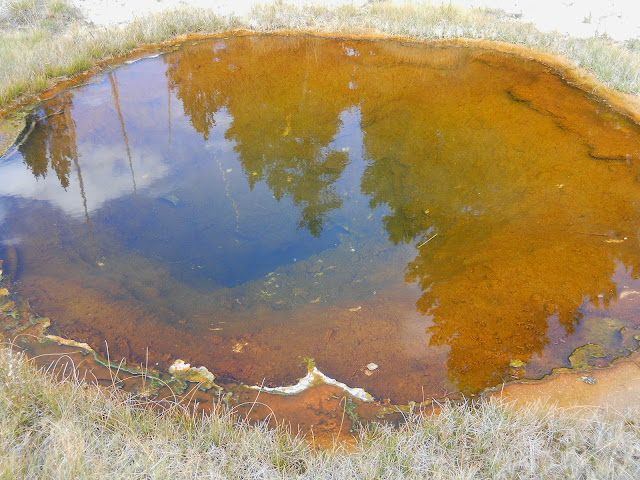 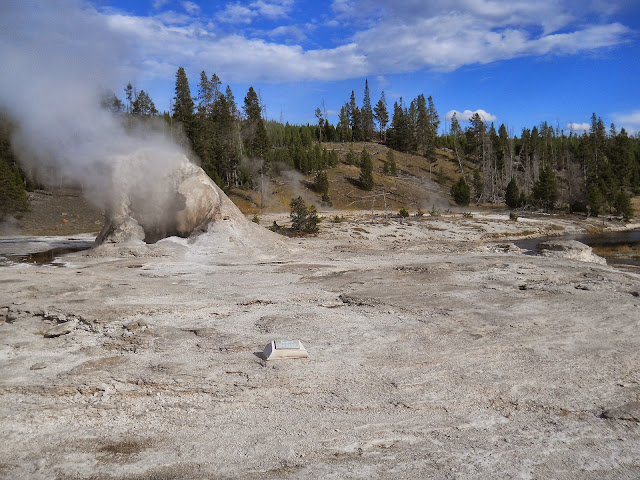 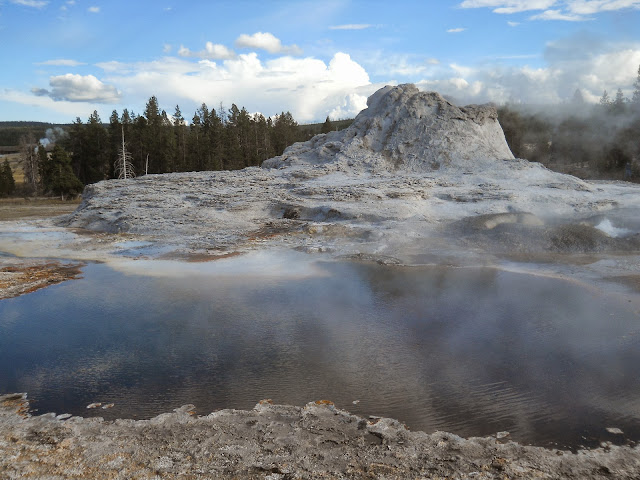 Several campgrounds in the park were closed for the season, but we were able to find a site in Grant Village Campground.  The next day we checked out the West Thumb Basin, which is a smaller caldera inside the greater Yellowstone caldera.  That is another very cool area, with several hot springs at the shores of Yellowstone Lake.  (Apparently people used to catch fish in the lake and cook them right there in the hot springs, at least until they discovered that it made the fish toxic.) 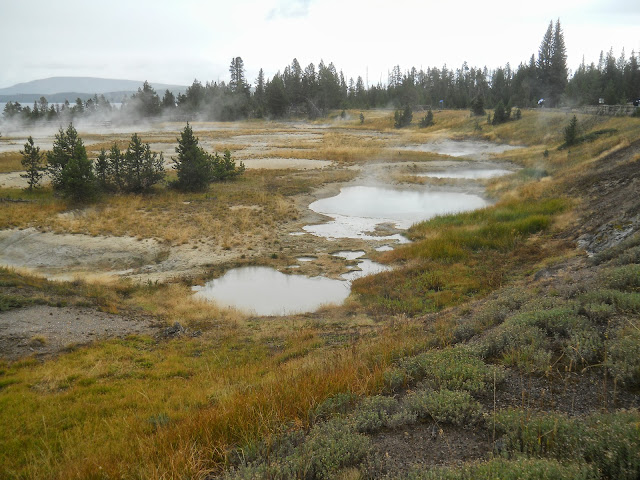 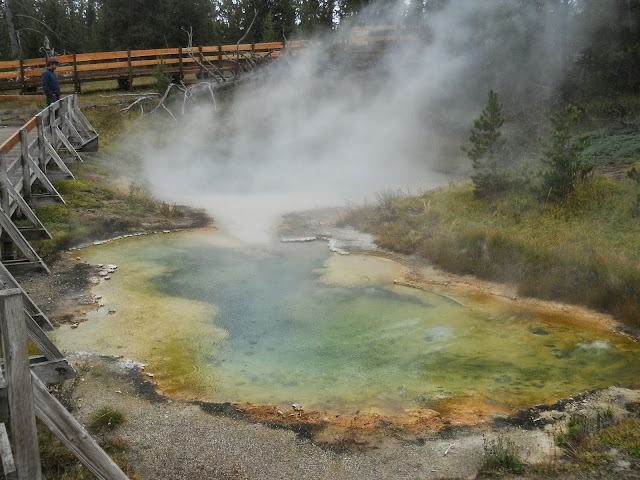 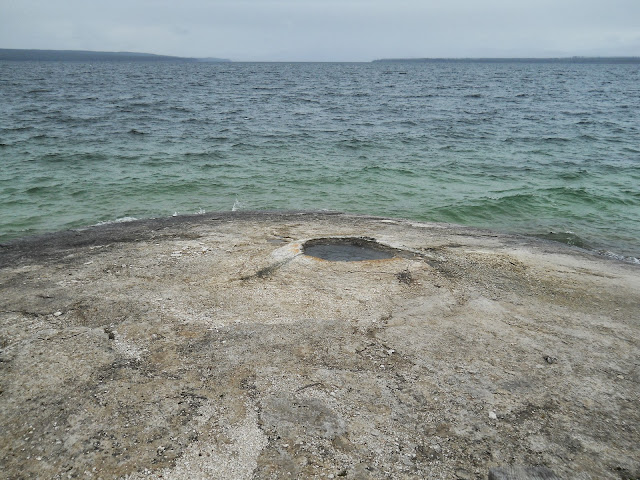 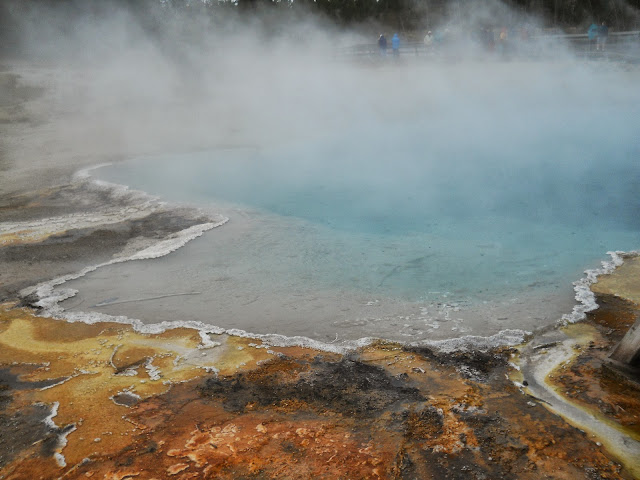 We continued our driving tour of Yellowstone, and Cara had just commented about the surprising lack of wildlife sightings when we rounded a corner to find a buffalo ambling along the road before finally crossing over into the woods. 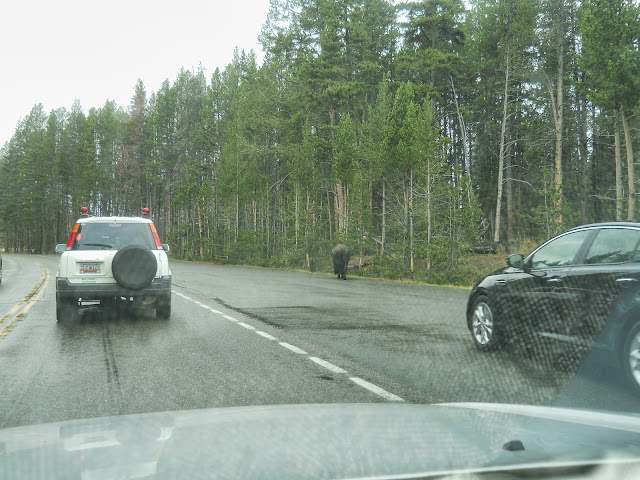 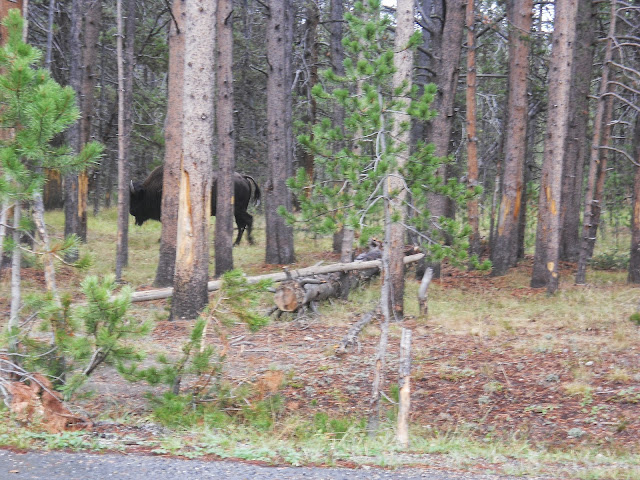 Our next stop was the Mud Volcano area.  A foreboding sign was the metal storm drain that had been half eaten away by the caustic gasses coming from the area: 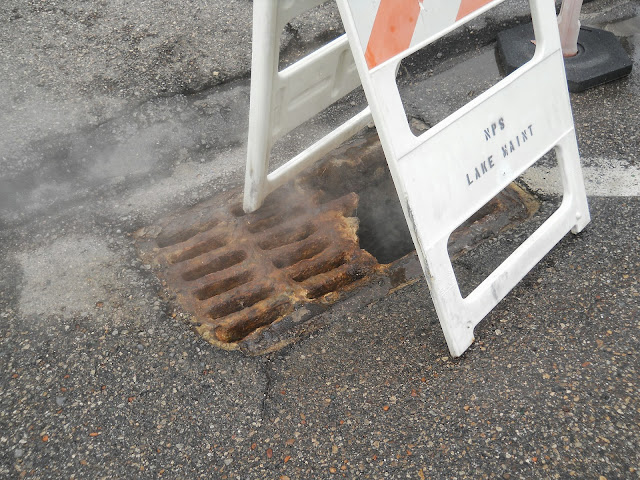 Other cool features found at the Mud Volcano area were Churning Cauldron, Dragon's Mouth Spring, and Mud Cauldron.  As we were leaving this area, we were also treated to the site of a herd of buffalo grazing on a roadside hilltop.

In the late afternoon we made it up to the Grand Canyon of the Yellowstone to see the Upper and Lower Falls.  We were most impressed by the south rim views.
As we were leaving Yellowstone (via the Northeast exit) we saw a Pronghorn Antelope (not really an antelope) by the side of the road.  We also saw tons of people on a hillside with high powered lenses looking across the road at a bear doing something.  We couldn't see the details, but we later learned it was a bear feasting on a dead buffalo. 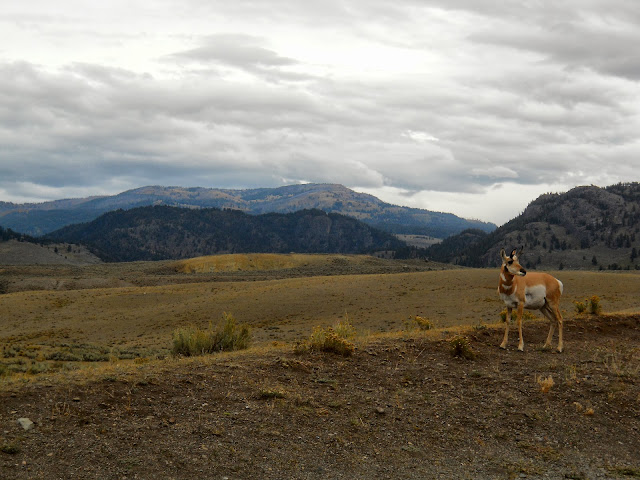