Wow - what fun!  Lots of people told us not to miss Last Thursday on Alberta.  So glad we took their advice!  We encountered beautiful new art works, upcycled products, resale items, good music, delicious food, and tons of nice people.  We started out at 15th (the start of the blocked off section), and decided to make our way up one side of the street, then come back down the other side.

At the start of it all we found a vendor selling notebooks upcycled from old vinyl album covers.  Couldn't help but purchase one made from Janis Joplin's "Pearl" album cover as a gift for a friend.  She will flip when she gets it in the mail.  We also purchased a ring made from an old public transportation token.  In fact, it has an old token from Indianapolis Railways - what are the chances of finding such a souvenir of our hometown out here in Portland?!  Another nice find was a cool keychain made from twisted copper.  (We both love twisted copper art pieces.)

Amazingly, when we passed Pine State Biscuits there was no line (and there is always a line there), so we took the opportunity to see what all the fuss was about.  We just wanted a snack, so we thought we would get something small.  Eric enjoyed a biscuit and gravy, and I had a biscuit with honey and butter.  However, just one biscuit and gravy was almost too much for Eric, and my yummy biscuit filled me up all night as well.

We also stopped in at Elixir Lab for a quick drink.  Jacob Miller and the Bridge City Crooners happened to be playing.  We had seen them at the Beerfest and really liked their old-timey kind of music.

﻿
The street became packed with people, and we were barely able to see everything before it was over and the vendors were packing up.  However, we did manage to run into our two nieces, who laughed when asked if they were misbehaving, and who were offended by somebody asking them for a cigarette.  (They responded with something like, "Do we look like the kind of people who would smoke?  Eeewww!!!")

At that point they were starting to clear people off the street - very nicely, of course, because that is the Portland way.  First was a line of bicycles, each with a different letter that together spelled "LOVE".  Behind them were vans with loudspeakers asking people politely to clear the street.

We were also actually able to meet up with friends at Bollywood Theater.  They were closing down at that point, so we headed off for another bar.  We ended the night at Alberta Street Pub.  That was our first time there, but we will definitely be back.  Nice vibe, good local beers, plus we hit on a great band - Chervona.  Their Russian/Gypsy/Klesmer/Punk music really rocked and had the whole bar dancing! 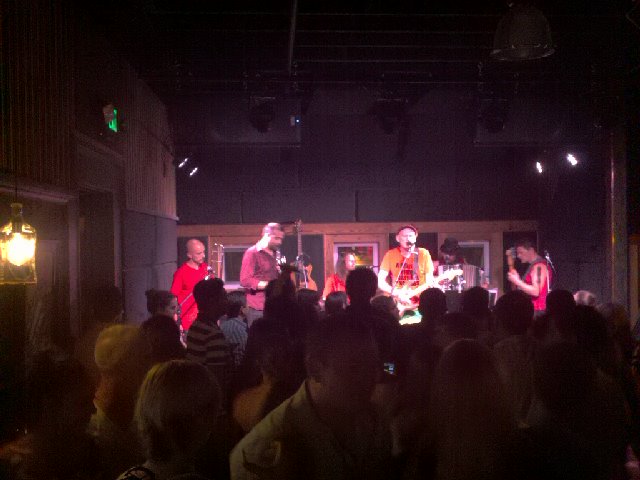