Eric had a nice productive day working at Nedspace and then at 4:15 he went to a meeting at the Lightbar  The restaurant opened on June 1.  The meeting went well and I think the owner, Alex, now fully understands the importance of Local Search, Yelp, Foursquare, etc.  He has a nice place there and he whipped us up a little special appetizer. 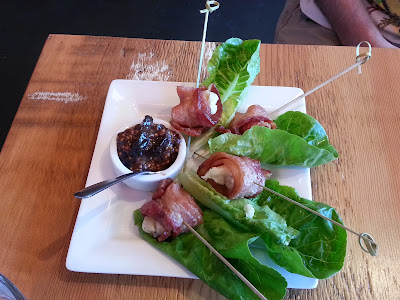 We have been taking the bus instead of driving anywhere and this has always worked out....but on this day from this location the bus was a real let down.  I had a couple of choices of what bus to take home and according to the schedule I was making a good choice, but I missed the bus, missed the transfer and ended up spending 1.5 hours getting home.....Then as we headed out for the evening the bus again sort of let us down and took a long time.

We finally arrived at our destination after dark and we ended up going to a gathering of food carts for dinner.  In Portland, many of the food carts are clumped together in semi permanent pods.  That is where we went.  We decided on Pyro Pizza and were not disappointed.


From there we headed off to our destination which was to see countryside ride.  We saw this band before and they were really good and unfortunately my pic and video did not turn out because the bar was too dark.

After the band was done we looked at the schedule and realized that the bus ride home would be very difficult and time consuming so we had to take a cab home.
Posted by A Travelers Log at 6:04 PM